What can our hands teach our heads about cutting? 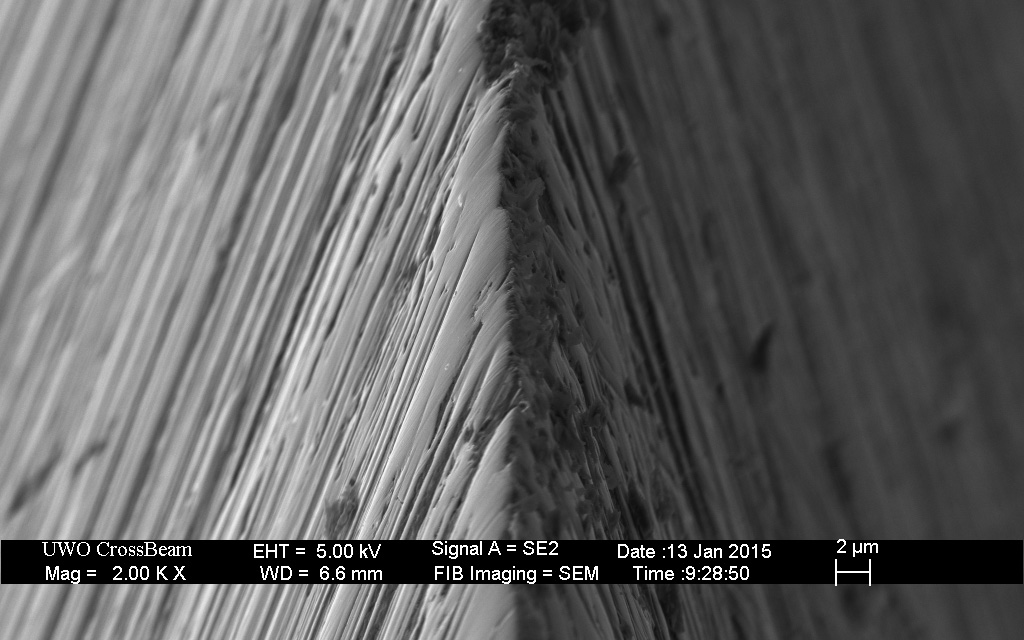 There are a lot of things our hands know that our heads don’t.

In this series, Unknown Knowns, I’d like to unpack the kind of things we “know” through our accumulation of tactile experiences, and put words to them so that our brain can understand, too.

For example, cutting. As adults, we know how to cut with knives. But can we explain what’s  really happening when we cut things?

By cutting, we divide a solid material into separate parts. Unlike tearing or breaking, cutting allows us to divide with precision. There are two ways a knife does this. One is wedging, and the other is sawing.

Wedging splits material by pressing and passing a “wedge” through it.

Imagine an ax chopping firewood. The pointy side of the wedge finds a crevice in the material, where the split can start. That crevice might be visible, like a crack on a log, or imperceptible, like a seam between bonded molecules. As the wedge presses deeper into the material, its triangle shape spreads the split further apart. When the tip of the wedge reaches the other side, the cut is made; the material is in two.

Wedging works well when you’re cutting through something that is ready to make the split by itself, like wood along the grain, or cutting a relatively soft material with a consistent density, like cheese or clay or cookie dough. All you have to do is to press the knife downwards. But when you have to cut things that have variation in their density, wedging starts to run into problems.

Picture a baguette. A baguette is basically dough that’s been turned into a sponge. On the inside, the sponge is soft and bouncy from the air bubbles trapped within the membrane, but on the outside the dough has gotten crispy from direct heat during baking. That’s a lot of different densities.

What would happen if you tried to cut this baguette with just a downward motion of a knife? With enough force you could make the cut eventually, but the cylindrical shape of the baguette would be squashed. And the cut section would be all pinched, right? No face for butter, no good! Materials with soft cell-like structure such as baguette tend to deform from direct pressure, which results in pinched ends or unintended cracks and tears where the blade didn’t even touch. This is where you need a saw.

Sawing slices material by hooking and ripping it.

Think of, well, a saw. It’s a row of pointy teeth that moves horizontally, pricking the material along the direction of the blade. The teeth engage with just the top layer of cells, ripping through the cell structure layer by layer. This can all happen without squashing anything, because the process requires much less downward pressure. A cut made by a sawing motion - whether slicing bread, styrofoam, vegetable or wood - creates a cross section of cells that looks like a stack of truncated bubbles, each with its mouth wide open.

Now, would you be surprised if I told you that wood saws, bread knives and serrated steak knives were not the only knives that do sawing? ALL sharp blades are actually tiny saws that are too small for the naked eye to see. Sharpening is essentially a process that gives knives a set of microscopic saw teeth.

Think about the time when you tried to slice a tomato with a knife that hadn’t been sharpened in a while. Remember how the blade would slip and slide on the skin? This is because the blade got too smooth. Without its saw teeth, the knife couldn’t prick open the tomato skin. Tomatoes are just like baguettes, only the bubbles inside are much much smaller, and they hold liquid instead of air.

Anyone who has ever sliced a tomato, I think, subconsciously knows to use the saw instead of the wedge. Our hand instinctively knows that pressing a dull knife straight down into the flesh would end in a sad crushed tomato mess.

But sometimes the question of whether to wedge or to saw isn’t so obvious. Onions, being much crisper than tomatoes, seem to cut relatively fine with a downward wedging motion. What people don’t realize is that this causes a needless amount of tears!

Can you see why? Pressing a knife blade straight down on an onion is like popping a water balloon full of tear gas! Why cause all that splash when you could calmly saw open the onion cells, keeping most of the onion juice held within their truncated chambers? Just slide your knife away from you as you slice, and let the belly of the knife edge make a nice soft landing to the cutting board. Your eyes will be much happier.

By internalizing the model of wedging and sawing, all cutting starts to make more sense. Way back when I thought of knives only as wedges, I used to struggle cutting card stock. I would stab the tip of my utility knife into the paper, pressing down hard, and and then try to move the blade while keeping the pressure. This, I later learned, was a terrible way to cut paper - dangerous, prone to error, and exhausting!

Instead, what I needed to do was put some sawing power into action. Nowadays I angle the edge of the blade as close to the paper as possible, maximizing the contact between saw teeth and paper, then just glide the knife toward me along the straight edge. Once, twice, three times, and there! The piece simply comes off. No tugging and tearing the parts you missed - just off.

Next time you’re about to cut something, take a moment and try engaging your tactile imagination. How would this material interact with a blade? And how would you like the cut to end up? Pinched like ravioli? Truncated and clean? A raw, natural split, like firewood? With a good knife, and good hands, the choice is yours.