The Funny Thing About Personal Space

It's less about the person and more about the space. 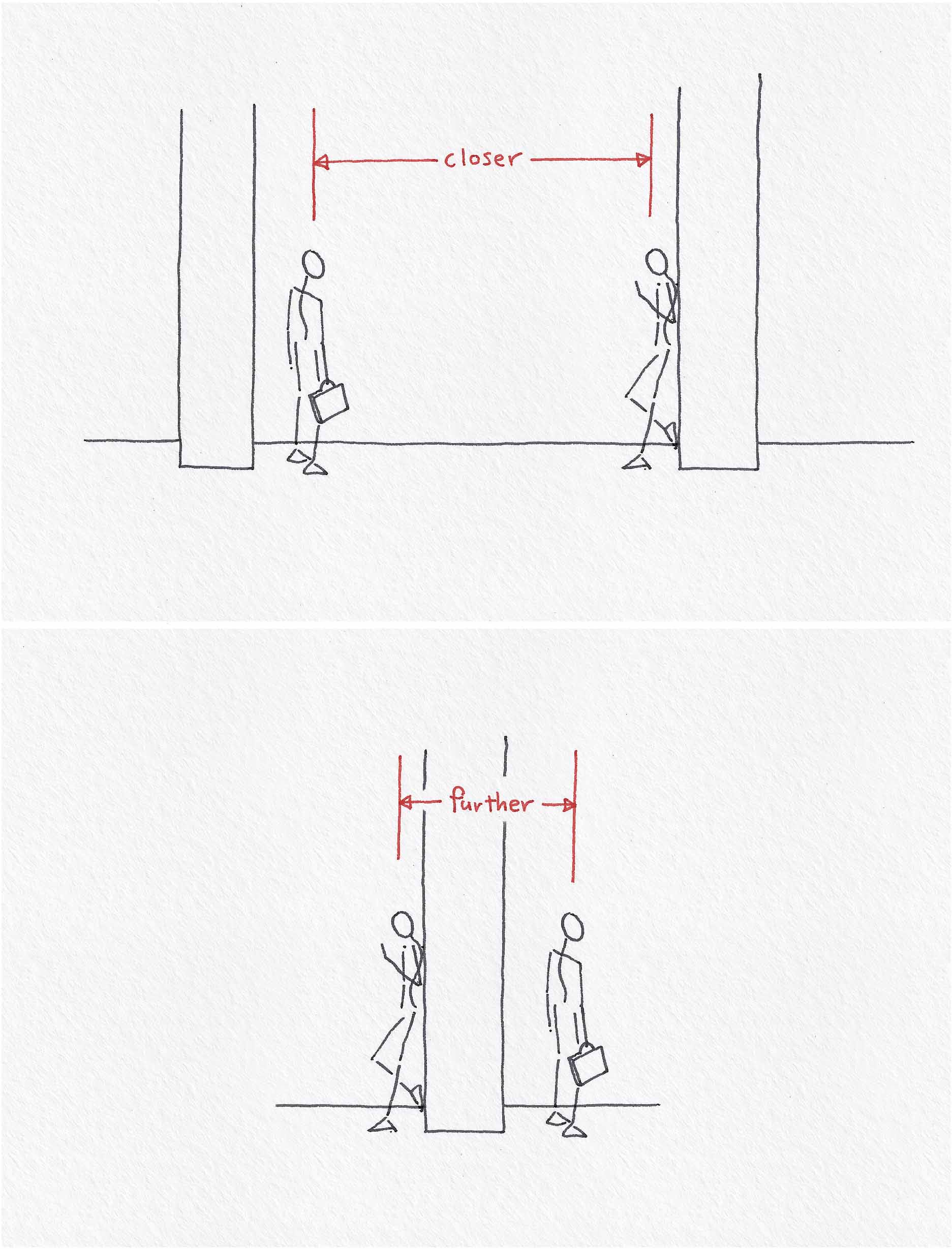 If you were asked to draw a diagram of what “personal space” looks like, chances are that you’d draw something like this. A circle, or multiple concentric circles with a person at the center. The circle represents the boundary of how close “others” can get before you start to feel uncomfortable.

We’re aware that the size of this radius can vary according to different factors: the relationship (your lover vs. your father-in-law vs. a stranger), individual preferences (“He’s nice, a bit of a close-talker...”), and culture (this article says that people in Romania prefer to be nearly twice as far from strangers compared to people in Argentina).

But there’s more to it than that. Riding the New York City subway everyday made me realize something: the acceptable personal distance fluctuates enormously depending on the space you’re in, and the physical things that surround you.

The guy on the right leaves, and the girl with glasses moves one seat over. What’s happening here? What changed?

Let’s try another example. You’re on a crowded subway car, and there’s a person sitting two seats away.

What would happen if everybody on the train car left, except for you and that other person?

You’d feel a knee-jerk impulse to move further away. It’s strange, though. Someone sitting that close was perfectly fine when the train was crowded.

That’s the funny thing about personal space: it’s less about a predetermined distance around an individual, and more about the distribution of people in a space: Your personal space could be calculated as such:‍

We cannot resist the pressure of even distribution.

At my neighborhood subway station, there's a row of columns spaced evenly along the platform. One morning, I was walking down the platform, looking for a place to stop and wait for the train. The platform wasn’t so crowded, and there was plenty of room for me to stand - but for some reason I kept walking.  When I found myself all the way at the end of the platform, I realized: the spaces between the columns were each taken up by exactly one person. There was an unspoken sense of ownership each person cast over their “chamber”. I was subconsciously looking for an empty chamber for myself, but all were “taken”.

That's another funny thing about personal space: the chamber effect. People use landmarks around them to define the boundaries of their personal space. On the subway platform, each person's space extended from wherever they stood to the next column. These chambers are an illusion - one that dissipates as soon as there are too many people on the platform - yet they can be so palpable that it feels like a slight offense to invade one. “How dare you enter my chamber. Go get your own!” Sounds a bit insane, but deep down I know this is how we all feel.

Depending on situation, the chamber effect can expand one’s personal space, as we just saw, or restrict it.

Let’s go back to that bench. What would happen if we took away those chunky arm rests?

Nope! Without the dividers, people need more space to feel comfortable. It’s not simply a matter of these people being greedy and claiming more space as soon as they could. The chambers created by the armrests actually give people permission to sit very close to a stranger, announcing that it’s not their choice to get so close. “This distance was assigned to me, you can’t think I’m a creep.” The dividers also ensure you don’t touch the next person with your butt (a BIG relief). Defining chambers is a smart way to maximize the number of people who can benefit from a limited area; it has the ability to compact our (otherwise bloated) personal space.

So we’ve seen two ways that physical surroundings affect the size of our personal space. But what about the shape of it?

Why is the second situation so much more awkward than the first? At the very least, I’d bet you would shift your body to face another direction, and hope the person sitting in front of you would do the same.

How much the other person can see you - their field of view - is just as important as your distance from them, if not moreso. Guys, I think we’ve found ourselves a third funny thing.

Would you say this annotation feels true?

If so, personal space might not be a radius that circles around you, but a vector radiating out of the other person. Like this:

Even distribution, the chamber effect, and field of view. These are all examples of how the physical world affects what we do, without us really knowing. One mission of Hands & Objects is to uncover the many ways that objects do this to us. It’s an invitation to peek inside a designer’s brain.

What ideas do we take for granted? Are those assumptions really true? These are the questions designers ask themselves all the time. By observing others, as well as our own subconscious behaviors, we get to the bottom of what’s really happening.